Jim Beary’s passion for farming is clear to see and he is proof that if you’ve got the desire and the drive, you can achieve great things. He recently took to the spotlight in our popular agriculture series ‘An Audience With…’ and his story is inspiring.

Despite having to sign on the dole at one point, Jim built up a successful small-scale pig farming business, supplying to Michelin star restaurants and celebrity chef Antony Worrall Thompson. But that success was snatched away following the financial crisis and the business, like so many others at that time, was no longer viable.

Not ready to give up, Jim, originally from Garstang, Lancashire, who now farms in the Peak District, was determined to realise his childhood dream of running a farm and found a way to achieve that.

The son of a pig farm manager and nephew of a tenant arable farmer, Jim’s passion was ignited when he was a young boy and never faded away. “There were times when I wondered if it was actually something I was ever going to be able to do but the burning desire was there from a very young age,” says Jim. “I was employed [on the farm dad worked on] as the farm dog at one point because there was an allowance for a sheepdog and that was my wages. It was about a pound an hour. And I loved helping my uncle on the farm near Liverpool. There was a variety of different types of farming which really interested me and still does.”

After completing his A-levels Jim worked for a year on a neighbour’s farm before gaining an HND and degree at Harper Adams University in Shropshire, and then in his early 20s he went to work in New Zealand.

“It opened my eyes up to a whole different world of farming. I had a job as a possum trapper for a little bit, which was interesting. I really enjoyed it. It was such a different attitude towards things over there. It was very much a can-do attitude and they looked at solving problems. It’s very forward-thinking and progressive, and positive as well.

“I wanted to come back and be a little bit more like that myself. It made me even more determined to try and get farming on my own at some point.”

When he returned to the UK, Jim didn’t have a job. He describes the day he signed on at the job centre in Preston as one of the worst of his life and he walked out knowing things needed to change. He went around local farms asking for work and managed to set up as being a self-employed farm worker - but still knew he wanted to be doing it on his own.

Jim found a little bit of land to rent and bought some pigs to breed. Along with his mum, who had recently retired from teaching, they started setting up at farmers’ markets and selling pork to restaurants all over the country. At that point he was so busy he couldn’t continue his contract work, but when the recession hit in 2008 their business suffered. The price of pig feed went up, and in the space of a month sales halved while costs almost doubled.

He says: “It didn’t take long to realise we just couldn’t carry on, which was a real shame because we put a lot of effort into it and had a really good product. It was difficult and there was a time when I was a bit fed up with farming because I felt like I was dealt a raw deal but the passion started to come back and I thought, ‘I need to have another go at this because it’s what I’ve wanted to do since I was a kid’. I realised I needed to get a proper tenancy instead of renting bits of land.”

Jim was given the opportunity to take on a winter gritting contract. He worked out the costs and borrowed the money from a friend to buy a gritter. “It was absolutely freezing the first year we did it. I think it was 2011. I was out every night, but after the first month managed to pay back the money for the gritter. I think I did nearly 80 nights, and suddenly from being in the position of not having a penny, I managed to pay some debts off and had a bit of money in the bank,” he says.

Jim was then able to put together an application for a tenancy in Staffordshire. He even lined up a girl he went to uni with to agree to pretend to stand in as his wife at the interview (plus another one as a back-up) in the hope it would make him the successful applicant – he didn’t go through with it in the end but was thankfully offered the tenancy without his ‘fake’ wife. He decided that when it came down to it, it was better to be honest and open and come up with a good plan for the farm.

“I wasn’t the highest bidder,” says Jim. “It’s not always about that. It is an important factor, but you’ve got to have a plan that’s going to work for you, means you can stay there for a while and is going to work for the landlord too. They don’t want someone coming in and running out of money after a few years. It’s also about the value you are going to add to the farm.”

“It was also a big positive I still had the gritting business. That second income was really important in getting started and probably helped me get the first farm. Rome wasn’t built in a day and it takes a while to build up. There’s no shame in doing it part-time to start with.”

Jim farmed in Staffordshire for five years and managed to quickly expand – taking on more land, getting grazing agreements and converting his sheds into a calf-rearing unit to boost income. It soon became a full-time venture and at one point he’d probably taken too much on - still gritting 13 hours through the night in Cheshire before returning to farm through the day.

“I couldn’t carry on doing it. It was dangerous and I was probably going to have a nervous breakdown or something. I managed to get some extra help,” he says.

Jim outgrew the 85-acre Staffordshire farm and made the move to his current upland farm in the Peak District. There, he and his wife Julia, have worked to put in the essential infrastructure the 350-acre farm was lacking, including sheds new fencing and a solar-powered water pump.

Their efficient farming practices led to them doubling their stocking rate in three years and cutting the cost of prime lamb production by 30%. They also run a B&B pig unit, looking after 1,000 pigs, which provides the bulk of the fertiliser for the farm.

“The first thing you’ve got to do is make the best of what you’ve got,” says Jim. “Farms are a lot more capable than people think. Getting the pH of the soil right will almost double the amount of grass you can grow. You could go and rent another 100 acres which is the same as you’ve got, or you could double the growth on the land you’ve already got.

“It’s all about optimising rather than maximising, and putting the farm in a position where you’re using the natural resources on the farm to be as productive as possible, rather than having to throw inputs at it, which is what we’re trying to do here.”

Jim, a former winner of The Farmers Guardian Best New Entrant award, is also an advocate for ensuring there are opportunities for future talent to start out in the industry, the way he did, on council farms.

Listen to Jim’s story as he talks to our farming accountant and Head of Agri, Andrew Robinson on his methods, advice for those wanting to get into farming, how he’s preparing for the reduction in support payments and his thoughts on diversification and climate change. 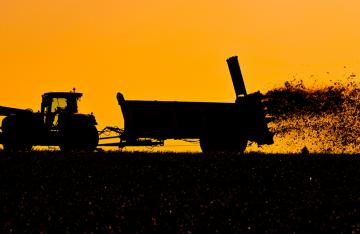 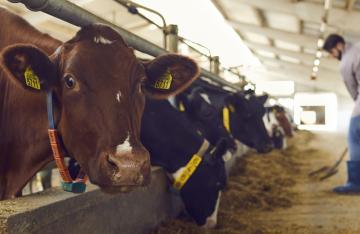 Don’t be caught out by HMRC on farm contractors